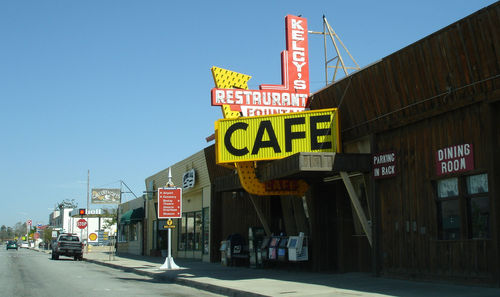 I’m not actually positive what is considered to be a “small town”, but I’m fairly sure our new town of about 12,000 falls under that category. This post over at The Simple Dollar got me really thinking about living in a small town. We used to live in a city of over 125,000 with tons of neighboring cities and millions of people within miles of us. It was just 30 miles away from downtown LA. (FYI: 30 miles in LA means an hour drive, just sayin’.)

When we first announced we were moving to Tehachapi, we got a lot of interesting comments. Some people seemed down right offended that we would move from our home town to Tehachapi. “What are you going do DO there?” The answer: Live. Live without the traffic, the overcrowding, the overpriced EVERYTHING. Live while focusing on what’s important which is living itself. Let’s face it – to afford to live where we used to Blaine and I would have had to work like crazy just to MAYBE afford a tiny house on a tiny lot on a busy street. No exaggeration. I wasn’t going to school to be a doctor or a lawyer or anything where I would be able to afford a decent place to live in that type of a city nor do I really feel like it’s worth the money even if I were able to afford it. Then we would start a family and if we were lucky we would be able to afford to pay for a decent person to raise our children for us since, you know, we would have to work even harder to provide for a family. From the beginning of our relationship we decided that is not for us.

So we started searching for a place to settle down, a place where we could have the life we want that would be our own life, not one dictated by how to get by. All in all we discovered that I’m too attached to my family to move more than a couple of hours away. My uncle had a farm in the area that we used to go to all the time and I looked into the area. They call it “the land of four seasons” which is pretty rare here in southern (or are we in central now?) California. Sounds nice, right? Then we looked at housing and were blown away by the fact that not only could you get a house for a decent price, it actually had a REAL yard where we could go out back and throw a ball for the dogs to chase without worry of it bouncing over into a neighbors yard. Madness, seriously.

Then an opportunity presented itself and my parents decided they wanted to come too. They will be grandparents some day and it would be nice to have them around. So here we are. Yep – right now I live with my dad. My mom is living with my grandmother, since her job is still in Los Angeles, while she searches for a job closer to our new home. Blaine is living with his family, where his job is, until he finds a job up here in a few months after our wedding. We’re all making sacrifices to be here, but the important thing is that we’re all willing to make these sacrifices because we know that in the end we’ll all be here together. I’m so happy my parents decided to join us in moving to this town and I hope my little sister and her husband do too once he’s out of the Army.

It’s a new journey, moving from a metropolitan area to a small town. It’s very different, but so far I’m still very happy about this decision and I think it’s definitely the best decision we’ve made.