I know I have mentioned it many times before, but we just moved to a small town a couple of months back and it’s been fun getting to know all the local places. I still haven’t visited them all, but just last weekend Blaine and I went to the local movie theater, The Hitching Post. Fast Five had just come out and Blaine wanted to see it. To be honest, I did too. I’m not really into action movies, but the Fast & Furious movies were always able to keep my attention. Paul Walker helps. Did you know the first Fast & Furious movie came out in 2001? That’s 10 years ago! He’s still gorgeous and doesn’t look 10 years older.  Ok – off my Paul Walker tangent and onto The Hitching Post. 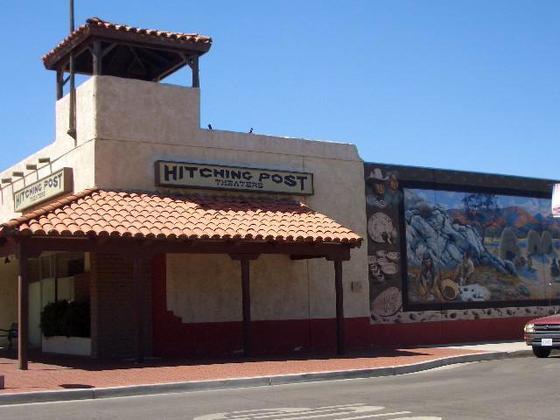 We had driven by The Hitching Post Theaters and giggled at how cute and small and non-theater like it looks. Plus look at the mural on the side of the building. Awesome! The lobby was seriously the size of a large bedroom instead of the size of a cathedral like most movie theaters.The actual theaters themselves are pretty small as well – the one we were in held 200 people. Yes, we asked. And I’m pretty sure that was one of their bigger theaters.

Before we had left we checked show times and pricing. Oh pricing. Another perk of living away from the city. The tickets were $8.50, about  30% less than the movie theater back where we used to live. On top of that, I didn’t notice before we went, but there are coupons on their website for $2 off admission. What! I’m not kidding, I paid $6.50 when I was in middle school. Amazing. I had a little giggle about the girl behind us who was complaining to her friend that they had raised prices. It’s all relative, I guess.

Then there’s the snacks. First off, they’re still relatively pricey. A small popcorn will run you $2.75, but that is great compared to the $4.00 I’m used to. Are you ready for the best part? Sliced Apples with Caramel on top. Best. Movie. Theater. Snack. Ever. I was so excited. I would much rather munch on that delicious treat than greasy popcorn.

All in all, Blaine and I have officially decided we will start going to the movies again. The Hitching Post is a great little movie theater and we’re kind of in love.