I watch entirely too much Reality TV. I know, your respect for me just dropped by at least half. Give me a break. My life is drama-free and pretty boring so I have to live vicariously through reality shows. I know, pathetic. I religiously watch The Bachelor/The Bachelorette, American Idol, The Voice and Teen Mom. There are some spoilers in this post so beware if you watch any of these shows. I just feel the need to vent about these shows. I know, I need friends. The Bachelor: I’m not going to lie, I’ve totally loved Ben since he was on the Bachelorette. But watching the Bachelor and watching him give rose after rose to Courtney after he has been warned numerous times about her? Idiot. I was a Casie B fan from the first night. She seems so sweet and they seemed to be perfect when they were together, but for some reason during the last episode when he met her parents, it was awkward and it looked like they lost their chemistry. I definitely thought she would be one of the final two and I was sad to see her go. I’m surprised Nikki is still around because I never thought they had any chemistry until this recent episode. Lindzi has always been at the top of my list too. At this point with the Courtney situation, though, he deserves that crazy because he keeps looking the other way and choosing denial. As for the picture of Ben above, I was going to put a nice picture of him looking all cute, but I’m mad at him right now so this is what happens. 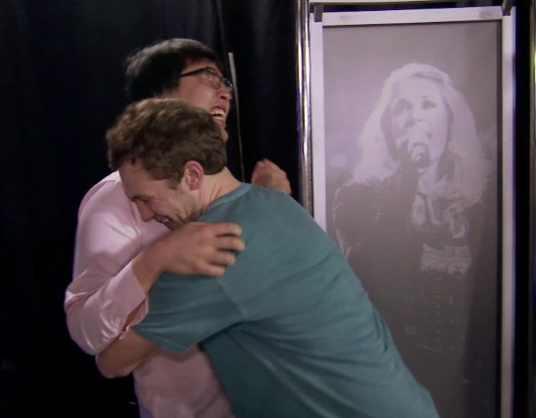 American Idol: Oh gawd. I love Phil Phillips. Someone please tell me he’s not like 17 years old so I don’t feel like a creep. (Can I just say: OMG. I’m old enough that for me to crush on a 17 year old is creepy. When did that happen?) I’m pretty sure he’s in his 20’s. I love him. Blaine is obsessed with Heejun because of his commentary and antics. He threatened to stop watching if Heejun didn’t make it to the top 24. The exchange last night between him and Ryan last night left Blaine in tears. Ryan: “So what are you sweating?”  Heejun: “Mostly water.” I always cringe because that guy has no filter and I’m afraid he’s going to say something really offensive and I’ll feel embarrassed for him. I also love that Heejun and Phil are besties now. Can we start calling them a combined name like Bennifer and Brangelina? Philjun anyone? HA. They’re awesome. I also really like the really tall 16 year old girl, I don’t remember her name. But Phil Phillips, I love you.


The Voice: There’s not much commentary for this show, it’s a little harder to keep track of because they don’t start with a huge mass of people and eliminate like the two above. Cee Lo is a creep and Christina kind of gets on my nerve sometimes.

Teen Mom: I’m catching up right now. This show is pretty hard and frustrated to watch. I can’t believe how Kailyn got all defensive and treated Jordan like that after she cheated on him, like she has the right to because it was with the father of her child. These girls are frustrating and it kind of makes me glad I’m not a teenager anymore because I’m sure my life was the same (minus the babies). Their lives are vicious cycles. Jenelle with her drug habit, Chelsea with Adam, Leah with her cheating. Although when Leah and Corey got married, I was really rooting for them and thought they would be able to make it. I actually liked Kailyn best out of these four girls, until now. I miss Caitlyn and Tyler (I think those were their names), the teens who gave up their baby, they were my favorites. Also — I’m literally in the middle of watching their interview with Dr. Drew. They’re all so blonde and fake tanned now, I miss when they didn’t try so hard because they’re on TV.