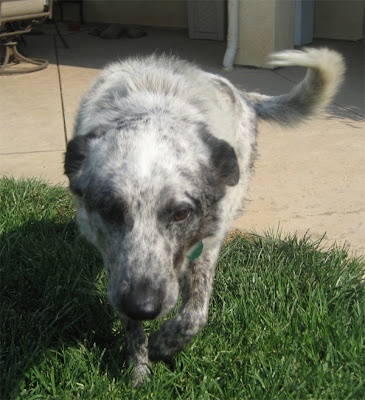 Einstein is my baby. I love him to death. I got him right before I graduated high school in 2005 as a puppy. But he is timid. And scared of everything. But also loving and wants to be in your lap all day.

At our old house he used to stare at the sky. Be outside with him for just a couple of minutes and at least once he will look at the sky with a look of concern. And at night? He would wait by the door to be let in. And refuse to go outside for a potty break if the sun wasn’t out. This guy is afraid of the dark too.

Fast forward to us moving into our new house in November. Our 1/3 acre backyard is not fenced yet and let’s just say the cost to do it will be more than the value of cars we’ve had. So the dogs go out into the fenced front yard. Our street, while not a main street, is a street at the beginning of the neighborhood that people drive on to get in and out. So there are cars driving by regularly.

Every time a car drives by, Einstein runs from the yard to the porch under the overhang. Scurrying low to the ground as if someone/something is going to hurt him. Looking at the sky as if an airplane is going to fall on him. “Oh he’ll get use to the noise” we said, everyone said, we all hoped. Well it’s been over three months and guess what, he is outside my front door cry and scratching. My brand new white, now stained with paw prints, front door.

The funny thing is, I will walk him down this same street, cars driving by and he doesn’t even notice. How is this even possible?

We tried being out there with him. You can’t be near the front door, because he’ll just hide between you and the wall behind you. You have to be standing in the middle of the yard where he can’t hide behind you. Even then he paces around whining and stops for a few seconds at the front door before pacing again. When it’s 15 degrees outside, the last thing I want to do is stand out there for 10 minutes while I wait for him to do his “business”. If he’s at the door crying and scratching and barking, guess what he’s not doing? And guess what he does in the house instead. Yep.

I decided it was time to try some tough love. I put the dogs out, I put a baby gate across the front doorway and left them out there for two hours. He cried almost the entire time and eventually he stopped. When I finally realized he was done, I went outside and he was hiding the far corner of the yard. This works during the day, sometimes. You know, if it’s not 30 degrees outside and I don’t mind having the door wide open to the world until he stops whining. At night? Good luck. He will cry, bark the loudest saddest barks and scratch at the door and windows. If I shut the door instead of using the baby gate? Same. I’m sure the neighbors think I’m cruel and am doing something horrible to him.

Am I stuck standing outside for 10 minutes, no matter what the weather, several times a day for the rest of his life? Probably. People who live in apartments do this, right? The only problem is, I can’t accept it. I try so many different things to fix it, but it can’t be fixed. And every time I fail at some new solution I may have found, I get so frustrated and angry at him and at myself.

This is Einstein. This is the way he is and it’s not his fault he’s scared. Acceptance, that’s what I need. Because I don’t need to be crumpled up on the floor, crying because I’m frustrated that he’s at the door crying and barking and scratching for hours if I let him. I guess it’s time to suck it up and spend an hour or more of my day, everyday standing outside while the dogs get their time to do what needs to be done.

This is my life. And it could be worse.