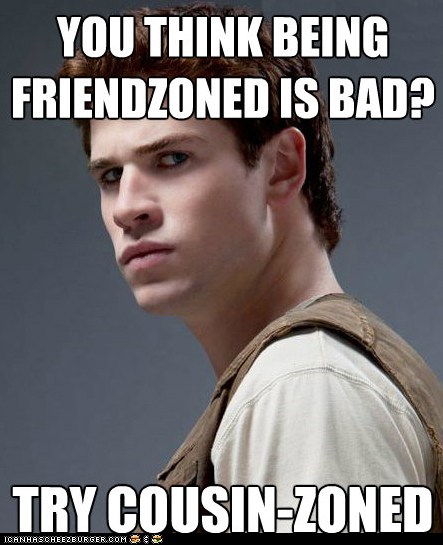 Let me start off with: I completely failed at re-reading the first book before seeing the movie. I got somewhere around page 100, thought about waiting to see it when I finished in a day or two, then literally minutes later went online and ordered our tickets. Yep.

I loved it. Things were slightly different than I pictured them and they did change some random things around, but overall I have no complaints. Other than it’s very hard to watch from the front row with half the movie being close ups and the other half being quick moving camera shots. The scene after everyone gets stung by tracker jackers? I eventually closed my eyes to literally keep from puking, I got that nauseous.

When we got to the theater I made a comment to Blaine that there should be an adults only screening of the movie. The tweens behind me gushing about Peeta got old real fast. They also happened to be reciting random lines that they knew were coming. If they weren’t like 12, something would have gone down. Except not really, I promise I’m not a jerk. I just would wish I had the guts to say something.

I would love to see it again, from a reasonable distance away from the screen. But overall, I’m glad I saw it. I’m still not in love with the actor that plays Peeta, even though I’m in love with his character. However, he’s growing on me and I like him much more than when I saw who was playing him the first time. I think I’ll continue reading the first book again even though I saw the movie already.

Oh and by the way, this website exists. Yes.