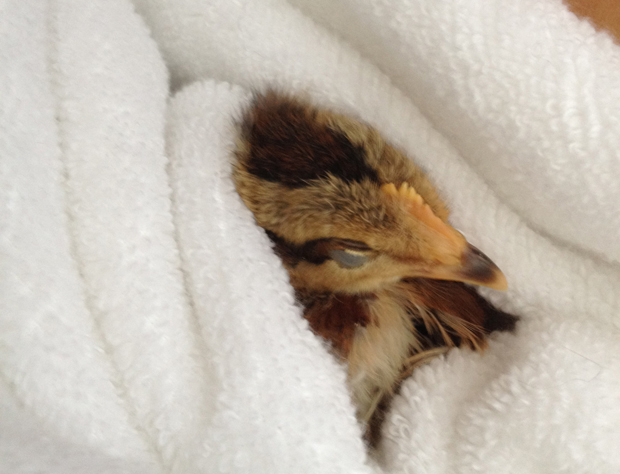 Our chickens are officially just over three weeks old. They are super awkward looking because they’re growing their big kid feathers, but there is still some fluff in random places. Mostly their heads look tiny because it is still covered in fluffy feathers. Well along with getting older, they are starting to get more curious… and active. This includes jumping out of their enclosure which is located in the bathroom. It doesn’t happen often, but the little droppings on the floor are an indication of that.

When we first got them I was a nervous nellie about the toilet and told everyone to close it, even though they were too little at the time to get out of their enclosure. Well… one of us forgot to close it last night and this morning the scariest thing happened. I was in the kitchen getting water and Blaine was checking on them before heading out the door for work. Suddenly he frantically tells me to come into the bathroom and I’m just casually like “Did one of them get out again?” and as I’m turning the corner into the bathroom he’s like “One of them is in the toilet!” My heart skipped a beat, but I assumed she was just flapping around in there and couldn’t get out. No.

Our little brown chicken was soaked to the bone, unmoving in the toilet. Head limp, eyes closed. I almost died of guilt and sadness right there. Blaine kept telling me to get her out and I told him “I think she’s dead”. He insisted he saw her move a little bit, so I scooped her little lifeless body from the toilet and grabbed a towel and started drying her off. She was completely limp and dead with only the tiniest bit of movement that I wasn’t sure was actually happening, or if I was imagining it. Finally I got more solid movements, the poor thing kept opening and closing her mouth and would twitch randomly. There was hope, but not much.

I immediately dried her off, put her under the heat lamp to warm her up and try and get her to wake up. Blaine called the vet (closed) and was redirected to a 24 hour vet who told us we needed to get her body temperature up, but not too fast. We were told to put towels in the dryer and wrap her in them. By this time I could see her body move as she took deep breaths, so I laid her down on a towel under the heat lamp and went to warm up some towels. By now she was making lots of noise, angry/sad little tweets. But she was alive. After the towels were warm I wrapped her up in one and we cuddled on the couch for a while. Her eyes would open if I moved her too much, but other than that she kept her eyes closed and hardly moved, but she was making tons of noise and breathing well which gave me hope. 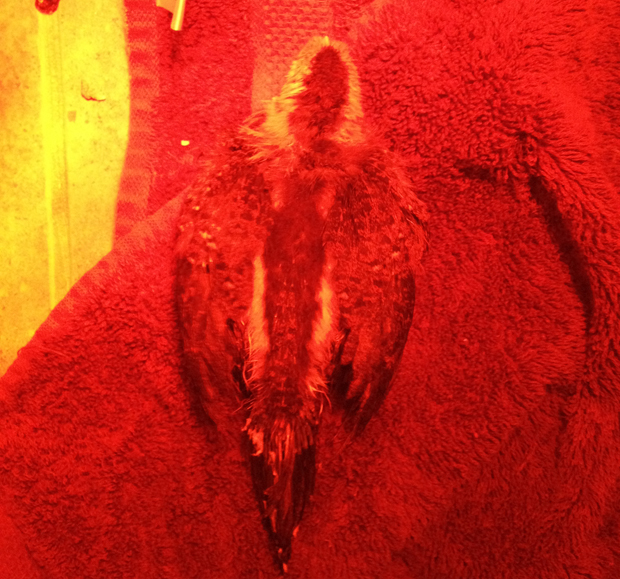 I put her down on the towel in front of the heat lamp again and she kept trying to stand, but didn’t have the strength to. I watched to make sure she didn’t fall over and once she was laying down I went to warm up more towels and feed the other animals since at this point all I could do was hope that the heat lamp helped her out. When I came back about 5 minutes later she was standing (HOORAY!) under the heat lamp. I left her alone in there to bask in the heat, it seemed to be helping and I didn’t want to stress her out with my presence.

Now, just a few hours later, she’s still got a few damp feathers, but she’s back in the enclosure with the other two chickens. She’s still a little weak, but she is walking around and pecking which I’m taking as a good sign. I’m keeping it a few degrees warmer than it needs to be in there so she can continue to warm up. The toilet seat is closed and I don’t think we’ll ever forget to close it again. It’s amazing that just 2 hours ago I was holding her lifeless body, ready to hate myself for the rest of my life for letting this happen.

I have had so many animals over the years and have been so lucky because accidents like this are very rare. I am filled with guilt and yet so happy that Blaine checks on them before work because I probably wouldn’t have checked for another hour or two and I don’t think she would’ve made a come back. I feel like the worst chicken mommy ever. But on the bright side, I think she’s going to be ok and this is going to be the most spoiled little chicken ever.